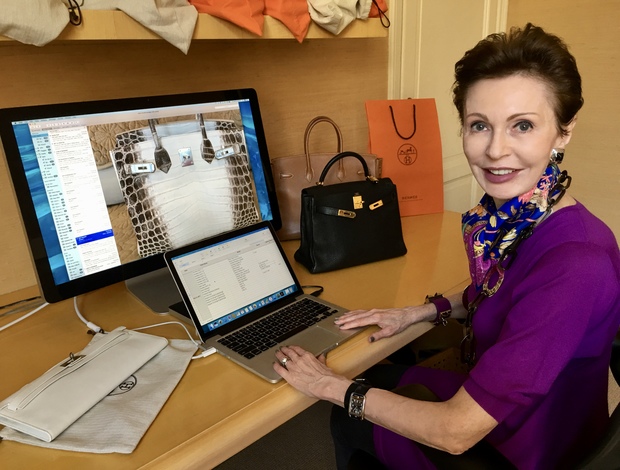 Ms. Giles developed her expertise in authentication based on over thirty years of collecting and meticulous comparative study of the construction details and artisanship methods of Hermès handbags and other leather goods. A believer in the importance of respecting intellectual property rights, Ms. Giles began applying her knowledge and expertise on Hermès handbags as a contributor to the lifestyle PurseForum in 2009 where she is the authenticator. Ms. Giles has provided authentication opinions to over ten thousand handbags on this site.

Ms. Giles has also been a highly experienced international corporate banker, with particular strengths and expertise in leveraged buy-outs, corporate restructuring and transaction management. This experience was accumulated over a twenty-year career in international corporate and investment banking in Australia, Europe, Latin America and the United States at Citibank, N.A., Melbourne, London and New York; Violy, Byorum & Partners, New York; and Mountmill Advisors, New York, which she co-founded.

Before commencing her banking career, Ms. Giles was a member of Australia’s diplomatic corps serving at postings in Wellington, New Zealand and at the Australian Mission to the United Nations, New York.

Ms. Giles holds both BA and LLB degrees from the University of Melbourne and was admitted to practice law in the State of Victoria, Australia.